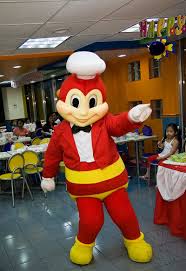 We can’t believe it but we are seeing it. Jollibee bested other food conglomerates and entities around the world after it was hailed the ‘Best International Fastfood Chain’ and it seems like the world is slowly embracing anything Filipino. The recognition was made by Thrillist.com a respected media group that ranks any thing that is related to food.
Who would think that Jollibee will catch this much coveted crown where it was a mere milkshake bar back in my childhood days in Makati.
With this much attention, could we actually see a bill passed in congress and declare Jollibee as THE national fastfood chain of our hospitable country? Who knows? Why not? If we’re passionate enough to celebrate almost any thing in our town to just create a happening, why not do something just to make us more proud of our heritage. And speaking of heritage, Italians would probably ban Jollibee in their country because it would potentially change the way they know how Spaghetti tastes like. Imagine, sweet spaghetti like no other person would thought it possible. Crazy.
We at Crossroads Hostel Manila are united in congratulating Jollibee for getting the world’s attention and I must say that it is also because of the Filipinos’ penchant for that crazy, dancing, happy bee mascot that really got the attention of the world to take a second look and see what makes Filipino tick because if it’s good enough for Pinoys, it must be good enough for Westerners, Asians, Europeans, Australians, and soon enough Africans.
If you’re traveling to the Philippines soon and you will visit Mt. Pinatubo or the Banawe Rice Terraces, don’t forget to do a side trip and do a selfie beside the jolly mascot called Jollibee. Indeed, it’s a national treasure that more travelers in the country should try at least one. Beats eating Balut if you know what we mean.

‘Tis the season for planning.

Christmas and New Year’s days are a special time for Crossroads Hostel Manila. We will use this time, not only celebrating it with our hardworking staff and family but to also perform general cleaning and do some up-keeping so we’ll be able to welcome more guests and people in the coming New Year.
Guests who have checked in and decided to continue staying with us can do so without further hassles. Those who will decide to come in and stay during these days are asked to do their part to keep the hostel clean from their dormitories to the kitchen.
Thank you for reading and we look forward to a better and wonderful times ahead.
Mabuhay!
October 23, 2014/0 Comments/by crhm
crhm https://www.crossroadshostelmanila.com/wp-content/uploads/2020/07/CHM-2019-TWITTER-LOGO-2-300x300.jpg crhm2014-10-23 14:54:432014-10-23 14:54:43Christmas and New Year's Operations

Thanks to Globe Charge, we can now provide access to all our traveler guests.

If you don’t have cash but have MasterCard and Visa credit/debit cards on you, go right in and we’ll help you Check In as early as today! Globe Charge has approved our accreditation and we’re now part of their partnership with the said payment gateways to assist all guests and customers we have in our hostel.
Prior to today, we could only accept cash transactions and Paypal transactions but with this new feature, it gives us more access to help more travelers for more convenience. We slide your card, you sign for it, and the system will send you an online receipt as a record of all your transactions with us — all Globe Charge transactions have 3% surcharge on it.
Come and enjoy the vast discounts and promos we offer and enjoy the advantage of having credit and debit cards from MasterCard and Visa at Crossroads Hoste Manila.
Now that makes us happy because it’s in line with our goal, “Tulungan lang po.” (Here to help).
Happy to serve you.
October 7, 2014/0 Comments/by crhm
crhm https://www.crossroadshostelmanila.com/wp-content/uploads/2020/07/CHM-2019-TWITTER-LOGO-2-300x300.jpg crhm2014-10-07 17:59:242014-10-07 17:59:24Crossroads Hostel Manila now Accepts Credit Cards